
What a trip!!!!
I was there to see France first game again Honduras (3-0). The game was in Porto Alegre, south of Brazil, not the most famous Brazilian city, but, what an ambiance!!! Dancing in the streets with all the Brazilians, (Samba, of course..) it was absolutely amazing!!!!
The night before the game, the French Fans met in a restaurant, and it was…. the BEST PARTY I have been. Singing (Allez les Bleus) all night long, dancing with a group of Samba girls, The party after the game…. Best time ever!!!
Then we flew to Rio to see the second game on a bid screen on Copacabana Beach (France again Swiss) and danced on the beach with the locals and the French fans… Could not be better.

Unfortunately, we could stay only 1 day in Rio de Janeiro, need to go back!!!! 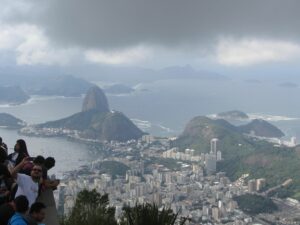